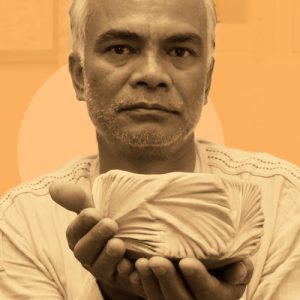 Having a great fascination for fine art and deep aspiration to flourish it to the world, Mr. Gopal Das Shrestha is Nepal’s legendary sculptor, ceramist, and fine visual artist. His fondness with the artist reflects in the name “Kalapremi”. He creates, displays, organizes workshops, and since the 1980s has taken part in residencies in Nepal and abroad.

With a degree in Fine Art, Mr. Shrestha has great experience as a lecturer and instructor in fine art as well as ceramics. He was the founder of Gokem Art Ceramic Studio for research & Development of ceramic and Nepali Terracotta Technique (1985) and also a Team leader and founder of the ceramic art revolution in Nepal (2000). Mr. Shrestha has also bestowed his knowledge of ceramics, sculpture techniques, etc. in many of his books as well as articles in national magazines and newspapers.

Over the years of his art career, Mr. Shrestha has administered abundant solo exhibitions. Some of his shows include “Peace from Love” (bronze and ceramic) displayed in Kathmandu Art Gallery (1998), “Khoj” (Raku /Ceramic) organized by International Residency Program (2003), “Single show in New Delhi” (Raku /Ceramic) India Khoj (2003), “Darker days of my country” (Raku /Painting) exhibited in Nafa Art Gallery (2005), “Nari Sathranj” by Siddharta Art Gallery (2017). He has also collaborated with the Japanese Embassy and Nepal Tourism Board to exhibit his works.

The bull is an incarnation of mystery, majesty and calmness. In one way or another, bulls are part of the cultural life of human societies around the globe. With such a vast scope, how do we explain the bull? In “Masculism”–an exhibition held at the Siddhartha Art Gallery from February 22-March 24–the artist Gopal Das Shreshtra Kalapremi gives us a clue by representing the bull as a symbol of the male and the masculine. The male, in the purview of masculism, is dominated by matriarchy, as the bull is dominated by cultural beliefs.

Kalapremi–a term which translates to ‘lover of art’–was born in 1965 to the traditionally high-ranking Newar ‘Shrestha’ clan. Although art is traditionally considered a characteristic profession of the lower ranks within the Newar community, Kalapremi says he has felt the need to create since a very young age. To follow his call, the artist had to face a society deeply rooted in traditional beliefs, but he did succeed with a lot of persistence and hard work. He emerged as an artist with his own portentous and original version of Nepali modern art, and these days, he is a revered figure in creative spheres of the country. Culture constructs and deconstructs us and all that which surround us in every stage of life. I recall the bullfighting prevalent in my own Spanish culture. Our bulls live luxurious and harmonious lives in the countryside in exchange for long deaths. Once they have grown big enough, we partake in a theatrical spectacle in which the animal, the scenario and the Spanish society play their respective roles. The bullring is a piece of art in itself. The colours gold and red decorate the space, full of bright lights. Within the form of a circle, like a Mandala, the bull is placed in the middle, like a God. It is worshiped from the beginning to the end, while it is being dominated by a luxurious bullfighter, dressed in gold and holding a cloak, as red as blood. Bullfighter and bullfight with each other during the Spanish spectacle, being opponents and at the same time being equals, one could not exist without the other.

Gopal Das Shrestha Kalapremi is a Taurus. And while the typical Spanish bulls are black and threatening, Kalapremi’s symbol, the Taurus, is represented here by a much calmer and pacific white bull. But what is brightness and what is darkness? Again, we come into a clash of cultures through the comprehensions of the bull as various colours. The white colour of the bull is dark in meaning in Asia because white is a symbol of mourning, a symbol of death. Gopal strolls amongst his bulls while wearing all white, mourning clothes he has adorned to grieve the recent loss of his father.

Kalapremi studied to get a BA in Fine Arts from the Lalitkala Art Campus but he never got his official qualification because he was always failing his exams. That is the reason he asserts that he is a self-taught artist these days. Indeed, the story of how Kalapremi learned to use clay as the main medium for his modern sculptures reveals his connection with traditional Nepali culture in his art. Gopal was still a student when the Ceramic Promotion Project, a German development enterprise that was trying to help the ceramics of Thimi and Bhaktapur evolve with the times, invited him to teach modern sculpture in the area. This teaching process turned out to be a mutual one as up until that experience Kalapremi was not fully unaware of the traditional techniques and uses of clay.

Kalapremi’s clay bulls are full of contrasting marks around their bodies. As if trying to depict a story, the artist designs different patterns on the cold skins of his ceramic bulls, particularly the pattern of the chessboard. In the end, everything is just a game: Black bulls, white bulls, black squares, white squares. One exists because the other exists. The east and the west, the male and the female are dichotomies in which one reconstructs the other; one cannot be without the other. This duality, characterised in “Masculinity’s” ‘Bull’ series, is also appreciated in his work, ‘Blue Diamonds’, where he represents beautiful androgynous figures that remind us of Shiva-Shakti. Also, in the series, ‘Darker Days of my Country’, we appreciate the repeating pattern of the chessboard.

This series, created during Nepal’s 10-year civil war, is a statement of all the pain, chaos and misery that the country was going through at that time. The drawings are not coloured; there was no colour in people´s lives during the war. The entire series is thus dominated by black and white; darkness and brightness in a bubble of clay that the artist tries to reconstruct by sewing carefully its broken pieces with poetic hope.

Although he firmly states that he has not been inspired by anyone, he admits that he loves Joan Miró, because of the lines, the simplification and the experimentation evident in the work.

Also, even though he was born Hindu, Kalapremi does not focus on religion in any special way as he believes in scientific spirituality. He is passionate about the power of women in society and the Tantric tradition of Nepal. Nature is his muse and thus his sculptural figures are made following organic lines and sensual shapes. This can be appreciated in his ‘Key’ series which is also an expression of masculinity presented through comparisons made between the key and the male reproductive organ (similarities with the Lingam). In his retrospective “Masculism” a lingam-installation comes out of the floor in the middle of the space, surrounded by his Keys as part of the spectacle.

Non-conventional art practices are another form of expression commonly employed by Kalapremi. He was one of the first artists in Nepal to try performance and installation art, and the fact that he studied drama when he was young says something about his interest in using the body as a medium for creativity. Moreover, Kalapremi was a founder member of the SUTRA art collective, an arts group which signified the onset of a new wave of art in Nepal: The use of performances and installations for socio-political purposes.

Kalapremi’s art faithfully represents the Nepal of today. With innocence and playfulness, he devotes his life to others through the beauty of his art. “Masculinity” connects the bull, the key, the board and the diamond with one word that represents the innermost feelings of an artist surrounded by his own society, but also by the global world in a multicultural scenario that affects all of us. On a massive chessboard, we move our little pieces. West and east, black bull and white bull, calmly move towards each other while tattooing their bodies with their stories and experiences. Who knows if one day the white bull might not have so many tattoos on his body that he will become forever black.

Kalapremi: Portrait of an Artist and Art Lover

No products in the cart.

Your wishlist is currently empty.